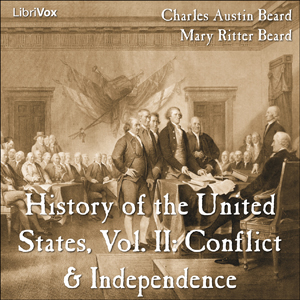 LibriVox recording of History of the United States, Vol. II, Charles Austin Beard and Mary Ritter Beard. Charles Beard was the most influential American historian of the early 20th century. He published hundreds of monographs, textbooks and interpretive studies in both history and political science. He graduated from DePauw University in 1898, where he met and eventually married Mary Ritter Beard, one of the founders of the first greek-letter society for women, Kappa Alpha Theta. Many of his books were written in collaboration with his wife, whose own interests lay in feminism and the labor union movement.
In 1921, Charles and Mary Beard published their textbook: History of the United States. A contemporaneous review stated: The authors… assume enough maturity in…students to justify a topical rather than a chronological treatment. They have dealt with movements, have sketched large backgrounds, have traced causes, and have discussed the interrelation of social and economic forces and politics. All this has been directed to the large purpose of helping the student to understand American today in all its national characteristics and as part of world civilization as well..The literary style is exceptionally clear and crisp, and the whole approach…is thought producing. As a textbook or handbook for the average citizen it ranks with very best.
The book is divided into 7 parts: THE COLONIAL PERIOD, CONFLICT AND INDEPENDENCE, FOUNDATIONS OF THE UNION AND NATIONAL POLITICS, THE WEST AND JACKSONIAN DEMOCRACY, SECTIONAL CONFLICT AND RECONSTRUCTION, NATIONAL GROWTH AND WORLD POLITICS, AND PROGRESSIVE DEMOCRACY AND THE WORLD WAR. (Summary from Wikipedia, Journal of History, and M.L. Cohen) For further information, including links to online text, reader information, RSS feeds, CD cover or other formats (if available), please go to the LibriVox catalog page for this recording. For more free audio books or to become a volunteer reader, visit LibriVox.org. Download M4B (64MB)